Finding a perfect carpet can be a daunting task. We know that every carpet is a piece of art, and just like the art on your walls, the carpet is the timeless art for the floor. When you provide your room essentials, we can start working together with one of our consultation services below to find your carpet soulmate. Let's get started!

Winning both national and international design awards, W STUDIO has established itself as a leader in Toronto's design community. Additionally, W STUDIO has always believed in giving back to the community and participating in many philanthropic endeavours. One of the highlights for Alan was collaborating with the Royal Ontario Museum to design and donate over 20 rugs to several galleries. W STUDIO's commitment to excellence extends beyond its noteworthy history to its day-to-day passion for helping customers find their carpet soulmate. 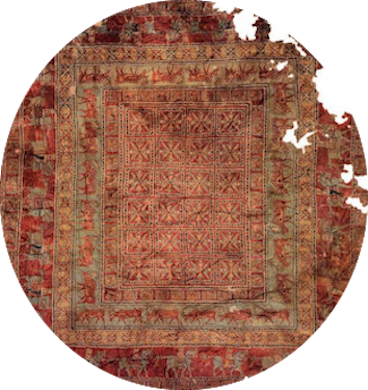 "If a picture is worth a thousand words, then a rug can leave you speechless."

The craftsmanship, materials and artistic skills required to create hand-knotted rugs have been perfected over thousands of years.

Area rugs have a long and rich history. They were originally woven by nomadic tribes thousands of years ago as portable floor coverings, acting as insulators and doubled as an early form of art featuring designs inspired by nature and tribal life. The oldest surviving rug named the Pazyryk, dates back to the 5th century BC and originates from Persia.

Over time, many cultures began weaving themselves into the world of rugs and creating their own traditions and styles, spanning from East Asia to Europe, and even America! The versatility of rugs has remained prevalent, no matter the century. As such, W STUDIO uses the finest natural materials combined with the same time-honoured tradition of rug weaving in a fresh approach by creating colours and design that are destined to be tomorrow’s heirloom.